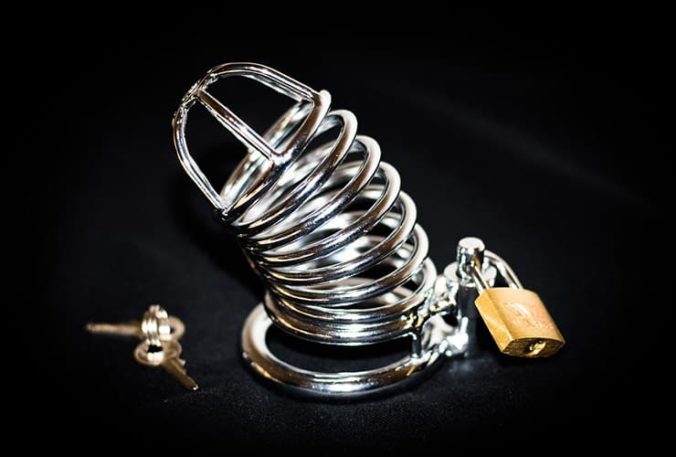 After placing an order for a variety of sex toys and briefly seeing male cock cages, I became more intrigued, wanted to know more and what it felt like to be locked in a chastity device. I quickly started to look online at different cages and decided to read a couple of blog posts.

I began to think about chastity more and more and decided to mention the idea to my Princess and we decided to place an order for a silicone chastity device, to begin with. Once the order was placed, I read a couple more blog posts later that day and was trying to imagine how it would feel to be physically locked-up, denied release and of course, what an erection would feel like!

The day finally arrived, the order was delivered. I was excited to open the parcel and actually see a chastity cage in real life. As soon as I had some time in private, I opened the parcel and started to feel the smooth silicone cage and put together the device to understand how all the parts fitted together, by this time I was already very excited with an erection and unable to wear the device, I kept the cage in a draw nearby to try on later that day.

The time finally came. I started to attach the ring and began to get another erection, I waited around five minutes before attaching the main section of the cage, swiftly followed by the padlock. The first few moments felt strange but rather comfortable, at this time I knew I could remove the cage if I needed to, however, I kept myself locked in chastity for over an hour the first time.

After wearing the cage for a few times, I discussed the experience with my princess, we agreed the next time we saw each other, I would wear the device and handover the key, allowing her to have full control once locked.

Locked And Handing Over The Key

That week went quickly and before I knew it, the day had come. I woke up in the morning and locked my cock up and went to work as normal. Although it was anything but normal, I had thoughts and reminders about serving my princess throughout the day, especially when I needed to use the bathroom!

Later that day, I drove to my princess. It was my first time driving with the cage locked, I constantly felt the cage and had thoughts about if I would be released and when my next orgasm would be.

As soon as I arrived, the key was handed-over, once the key was in her possession, she had the most incredible smile on her face. That evening, I was kept locked up while we made a trip out in public and had dinner. During the course of the evening, I had to remember to always use the cubical toilets as opposed to the urinals, due to the risk of being seen and mess it would make.

Once we arrived back to her place, she teased me for a while and I quickly tried to have an erection, my cock was getting harder and harder until it was prevented by the cage. Whilst trying to have an erection in the cage, I felt slight discomfort which I had been expecting but also enjoyed. My princess then began to remove the cage slowly, it was such an incredible feeling to be released, I was granted an orgasm and it must have been the best orgasm I have experienced!

How My Princess Felt With Me In Chastity

As I began writing this blog post, I asked my princess how she felt about her submissive being locked in chastity. She expressed how satisfying it felt knowing I was locked up and couldn’t be released until she decided.

From my short experience at wearing a cock cage, I feel it has made me feel a lot more submissive, closer with my princess and believe it has made our relationship even stronger. I am looking forward to continuing my experience with chastity and will continue to discuss this topic on the blog.